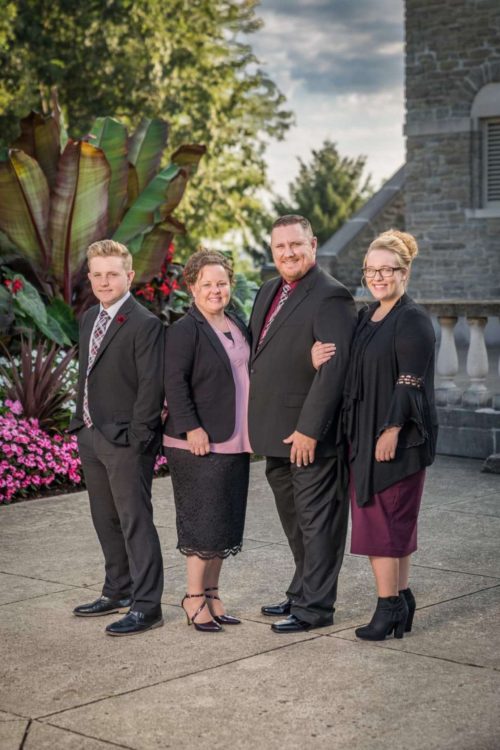 I reached out to the Isbells last year, but I believe this wasÂ  the perfect time to actually do the story, as they have a great song released now called ,”When I Pray”.Â  Enjoy the journey through these questions as we find outÂ  how the new song has ministered in many ways.

If you would please introduce yourselves to the SGN scoops Magazine to those who might not have heard of you?

We are a family group from Savannah, TN that consists of my wife and I (Eric and Rachel Isbell) , married 23 years this past November, our 19-year-old daughter, Autumn, and 17-year-old son, Kaleb. Autumn graduated high school last spring, and Kaleb will graduate in the spring of 2022.

You took off full-time in 2013. Could you share a little history you have in Gospel Music?

Gospel music has always been a very important part of our life. Growing up, Rachel and I sang with our respective families in our home churches, singing their favorite songs from the radio. When Eric was fourteen, he and his brother Marty helped form a quartet with two other guys from the Christian school they attended and won first place twice at the ACE school convention when Eric was a junior and senior. Eric also won first place for guitar solos those same years.

After high school, when Rachel and I married, we formed the Isbell Trio with my brother, Marty, and sang together part time for five years. During this time, my brother and I started writing gospel songs and the group started singing many originals.

Rachel and I stayed very active singing together and leading worship, while also pastoring in three different churches from 2000 to 2005. It was during this time that Rachel’s friend Lori Simmons started singing with us, and before long, we formed a trio called â€˜Accents Of Praiseâ€™. The group sang together over the next nine years on a part-time basis while Rachel and I continued pastoring. In 2009, â€˜Accents Of Praiseâ€™ won a Southern Gospel contest in Jackson, Tennessee and the prize awarded us the opportunity to record our first CD which was done at Daywind Studios in Hendersonville, Tennessee.

In the spring of 2011, Accents Of Praise recorded their first CD with Chapel Valley. Our daughter Autumn, who was only nine years old at the time, had written her first song called “You Can Know Jesus” and recorded it with us. Even then, it was obvious that we would eventually become exclusively a family group. Two years later, Autumn became a full-time singer at only eleven years of age. That first year, myself, Rachel and Autumn (known as â€œThe Isbell Familyâ€) did 250 concerts. Since 2013, we have performed over 2,100 times including multiple appearances on NQC showcases and main stage, Dollywood, multiple syndicated TV shows, and most recently the Gospel Music Showcase with host, Guy Penrod.

This spring we start working on our ninth Gospel Album with Chapel Valley. Most of the songs we sing were written by either Autumn or myself. There are some new incredible original songs on this next project, as well. We will be listening to originals written by other songwriters for this project and hope to find some songs that speak to our hearts and will fit with our style.

I remember I saw you perform at the showcase at the NQC where you won and got a chance to perform on NQC Main Stage. Could you share some of the excitement when you heard this news?

This was something we had daydreamed about, but truly had settled in our hearts that it wasn’t our ultimate goal. However, it certainly was a very cool experience, and we were honored to receive this opportunity. When our name was called to be the group that would go to mainstage that evening, Rachel and Autumn started crying. The song we chose to sing that evening is a song I wrote called “He Chose To Live” in which our son Kaleb was featured. We were selected again in 2019, and sang another song I wrote called, “Sometimes It’s You.” Autumn, who was seventeen at the time, was featured. I remember telling them that they were doing what Rachel and I dreamed about when we were their age.

Has this helped your ministry to grow? In what way?

Hard work, talent and God’s blessings are what we believe achieves growth. Not singular opportunities, but rather, these opportunities are a result of those things. I believe our ministry was successful in many ways before singing on the main stage at NQC, and trending in a very positive direction already. I do believe that singing at NQC has opened some doors that wouldn’t have been opened otherwise and we are very appreciative of that.

You have a newly released song called â€œWhen I Pray.â€ How did this song come to you?

I (Eric) wrote this song one day after thinking about all the times I prayed and God answered my prayer, including the time I encountered an atheist who refused to accept my many invitations to come to church. One evening this same atheist had car trouble and couldn’t get his van to crank. Neither one of us knew what was wrong with it. I know now that it was a dead battery. There were no lights, no power at all. It was completely dead. I told that young man, that I wasn’t a mechanic and had no idea what was wrong with his van, but I believed God could crank his van. He looked at me like I was crazy, but I leaned in and turned the key. It was still dead. I thought to myself, uh oh, I have said I believe God can crank this van and it’s still dead. Then I heard Jesus whisper to me, and he said, pray out loud. So, I turned the key and started to pray. I said,” Jesus, so Marty will know that God is real, would you crank this van?”, and immediately the van cranked. I jumped out of that van and said, “I told you God is real!” He had a shocked look on his face. Sadly, I never had the opportunity to see him accept Jesus as his Savior, but I believe this experience will always stick with him, as it has with me. Sometime later, I encountered another atheist who asked me, “How do you know God is real?” Without any hesitation, my response was, “Because when I pray, things happen!” This song is based on true stories of God answering my prayers. I’ve said many times, “God has answered too many of my prayers for me to be an atheist.”

Do you have a testimony to share of how prayer got you through?

There are so many examples I could share. Many times, we think of prayer as God providing something for us, but sometimes it has been for God to increase our faith or give us peace about a situation. God did this for us in 2016 when Rachel was facing a possible cancer diagnosis. She had discovered a painful lump in her right breast. Through this experience, we committed to accepting the will of God no matter the result of the test. We came across a video on Facebook of a little girl running around praising God for healing her. My wife and I watched this video about ten times as we poured our hearts out to God. We’ve never seen this video again, but God used it to encourage us that day. I felt that God was saying He was going to heal my wife this time, and I said to her, “Rachel, when you get the good report, will you praise God like that little girl did?” Through her tears, she nodded and said that she would praise Him no matter what. A couple days later Rachel got the phone call from the doctor. When he told her the test showed nothing, not even that there was a tumor, Rachel realized at that moment that the lump was gone and so was the pain. Yes, there was some praising and shouting going on that day!

This song is so accurate in this day and during this pandemic. Do you have stories from folks you prayed for that changed their test into a testimony?

Recently, at an event that we were performing at, a friend of ours shared with us that her dad was in the hospital. It wasn’t COVID, but they were afraid that if something didn’t change soon that she would lose her dad. She had shared the whole story with Rachel and I caught the end. The Lord spoke to me and told me to pray for her dad right then, but I didn’t. We went into the auditorium and were part of a great night of gospel music with our friends. That whole evening, God spoke to me about praying for this lady’s dad. I went up to their product table afterwards and there were many people around. I couldn’t get away from what God was telling me to do. I asked if I could pray, and she said yes. It wasn’t an hour later I received a text from her saying her dad had gotten up from his hospital bed and walked around and was talking, which he hadn’t done in almost two weeks. God healed him and he is now at home and doing very well.

How has this new release ministered to the crowd?

It has become a crowd favorite. People love the testimony behind the song, and many can relate to God answering their prayer. Someone said, “If that don’t fire you up then your woodâ€™s wet!” This certainly is one that gets people to their feet praising God.

Do you have a funny road story to share?

There are many things that we have laughed about in our travels, but Autumn says most of our stories are only funny because of how I tell it. What I’m about to tell happened to me (Eric) during a concert. Autumn and Kaleb were singing one by themselves. I sat down on a stool that had a weak leg, and it folded, and I went rolling across the floor. I didn’t think it was funny at the time, but everyone else seemed to get a laugh out of it.

Is there a favorite song on this Rise Up album? What song?

“I Have No Complaint” is all of The Isbell’s favorite, followed by “When I Pray.”

Â What’s your routine with regard to setting up your table and technical stuff for a concert?

We usually arrive two hours before concert starts. Until the kids get married, all of the chores belong to us. Eric and Kaleb set up the sound equipment while Rachel and Autumn set up the product table. Normally, by the time the girls finish their job, the boys are ready for sound check. Most of the time we take our instruments, which include guitar, banjo, mandolin and fiddle. Although we aren’t a bluegrass group, many fans enjoy our playing, so we incorporate that into our program. While everyone else finds a dressing room and gets ready for the concert, Eric tunes the instruments, then he goes to get changed. Everything is fined-tuned and checked again within 30 minutes of start time.

What’s the best way to get in touch with you, to pick up some of your products and do a booking for a church service?

Watch When We Pray

Thank you Eric for sharing your family ministry to the SGNScoops Magazine. And how important prayer in each life is. Blessings to your family as you are on the road sharing the Gospel.