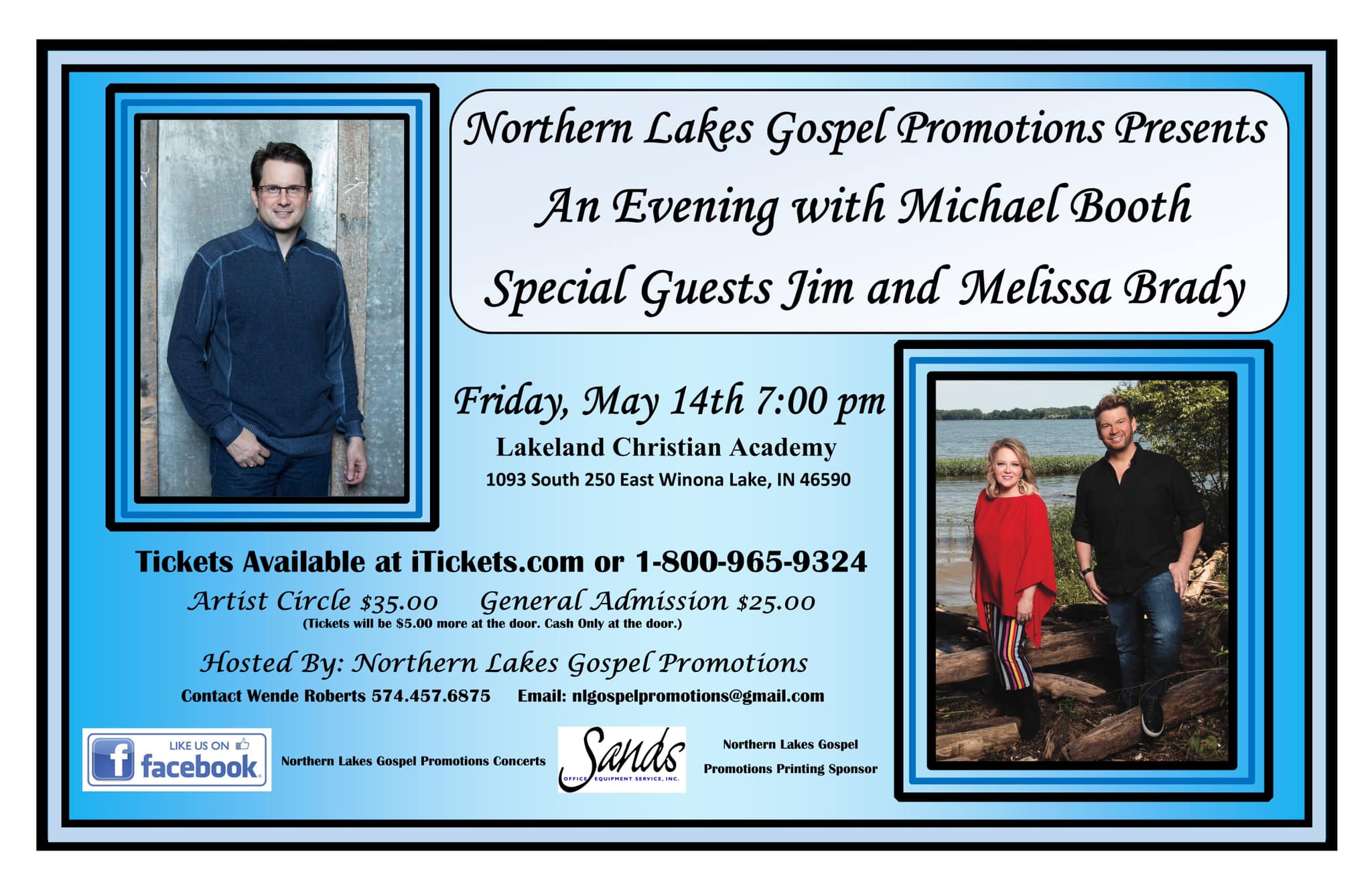 Michael Booth, of the well known and loved Christian Musical Trio, The Booth Brothers, along with Special Guests, Jim and Melissa Brady, will be making a rare appearance together in Winona Lake. They are coming for an exciting one of a kind musical event on Friday, May 14th at Lakeland Christian Academy.

Michael David Booth was born in Tampa, Florida and lived there most of life until his family moved to Spring Hill, Tennessee in 2004. His introduction to music came through hearing his dad’s southern gospel group “war stories” as well as listening to southern gospel music. He became a born-again Christian at the age of seven. He credits his study in the Word as a teenager in being instrumental in strengthening his relationship with the Lord. As a youngster, Michael became interested in playing the drums and would use his mother’s pots and pans as a drum set. He continued to play drums throughout junior high and high school, winning trophies and being awarded a jazz scholarship to college upon his graduation from high school.

Singing came late for Michael compared to his brother, Ronnie. His first attempt to sing came in 1990 at the age of 19. Although he had plenty of confidence when he was playing drums on stage, singing on stage was a different story. Eventually, with lots of practice, his desire to minister through song overcame his fear and started him on the road to becoming the artful singer he is today.

The past several years have been special ones for Michael’s career. The group has been privileged to sing with so many talented artists both while being part of the Gaither Homecoming program and pursuing their own concerts dates. When asked what these experiences are like, Michael says, “I guess the thing that affects me most is that among all the thousands of faces out there each night, I want to make sure that God uses the Booth Brothers to minister to those that need God’s touch and His free gift of salvation, even if it’s only one person. Bill Gaither tells us to sing in such a way that the folks get just a glimpse of heaven. What an awesome responsibility! And most of all, we want all that we do to bring honor and glory to our Lord and Savior!

Jim Brady has a long history of music and singing. He began singing when he was five years old with his mom and dad and seven brothers and sisters. They called themselves The Brady Family, but were affectionately known as â€œThe Christian Brady Bunch.â€ He was raised in Houston, Texas. Today, Jim lives with his wife, Melissa, in Spring Hill, Tennessee.

When Jim was sixteen he started writing songs and has since written over 100 songs. Many in the industry have recorded his songs including Ivan Parker, Lordsong, The Whisnants, Gold City, The Talleys, Legacy Five and The Booth Brothers. SoGospelNews awarded Jim Songwriter Of The Year for 2006.

For almost 10 years, Jim sang with The Shulers. The trio was comprised of Jack Shuler (Melissaâ€™s dad), Melissa Shuler Brady and Jim. During that time The Shulers were nominated for Horizon Group of The Year (Singing News Fan Awards) and New Artist of the Year (SGMA). Several of their songs reached the top 20 and top 40 on the gospel charts. The Shulers were best known for their family harmony and original songs written by Jim and Melissa Brady.

As a member of theThe Booth Brothers, Jim brought a wonderful baritone blend as well as songwriting skills and bass and acoustic guitar talents that wereÂ a welcomed addition. Jim reveals that â€œI knew from the first note we sang together that something was special about the blend. Mosie Lister said I â€œsounded like a brotherâ€ and Jake Hess said â€œyou fit.â€ Michael, Ronnie and I are like-minded, not only in the music, but also in ministry. It is exciting to see how God is using this group.â€

The main thing that Jim and Melissa, also a talented singer-songwriter, want people to know is: â€œWhat we do is always and only about the Lord and telling others about Him. When we write and when we sing it is our desire and our goal, first and foremost, to lift Him up in praise.â€

Melissa Bradyâ€˜s enthusiasm for ministry, excitement about the Lord and genuine love for people has influenced hundreds of people around the world.

As a child, music played a very important part in Melissaâ€™s life. As a young girl she traveled with her family in evangelistic ministry. She continued her musical ministry as a member of the Shulers. Melissa sang in the group for ten years with her father, Jack Shuler and husband, Jim Brady. During this time the Shulers were nominated for several awards such as: SGMA New Artist of the Year, Singing News Fan Award, Horizon Group of the Year, among others. This was a special time of ministry and growth for Melissa and a time that helped form her into the musician she is today.

Melissa is not only a very talented singer and musician; she is a very powerful songwriter. She is honored to have had her songs recorded by some of todayâ€™s top groups and soloists which include the Booth Brothers, Ivan Parker, the Ruppes, the Whisnants, the Shulers and many others. Several of her songs have become top ten songs on the gospel music charts. Melissa has been blessed to teach at the Steve Hurst School of Music in Nashville, Tennessee for the last three years. She is quickly becoming one of the most requested teachers at the School. Steve Hurst, the director of the School, says â€œMelissa is an asset to the School in so many ways. Her teaching ministry is touching the hearts and lives of many of our students and we are so thankful that she is sharing her talents and ministry with us.â€

In the past few years God has continued to open new doors for Melissa as she has performed on the Gaither Homecoming Concerts with her husband Jim Brady. She has also had the privilege of touring with the popular Homecoming artist, Lynda Randall.

Her ministry has taken her to thirty-five states, Europe, Mexico and Canada, where Melissa has witnessed the saving power of Jesus Christ change lives through her words and songs.

This exciting evening of worship will begin at 7:00 pm. The doors will open for seating at 6:00 pm and local favorites, The No Name Quartet will be sharing the pre-service music. To acquire additional information regarding this exciting musical event, call Wende Roberts atÂ 574-457-6875Â or email atÂ nlgospelpromotions@gmail.com.

Tickets are available at iTickets.com and are going fast! Artist Circle Tickets are $35.00 and General Admission Tickets are $25.00. Please note-all tickets if still available for purchase at the door, will be $5.00 more. Cash only please. (Concerts will follow Indiana Social Distancing Guidelines at the time of the event.)

Make plans now to join Michael Booth, along with Special Guests Jim and Melissa Brady at Lakeland Christian Academy on May 14th for an awesome event filled with a life changing message.

Group Rates-Every Group of ten or more will receive $5.00 off each ticket in their group!!