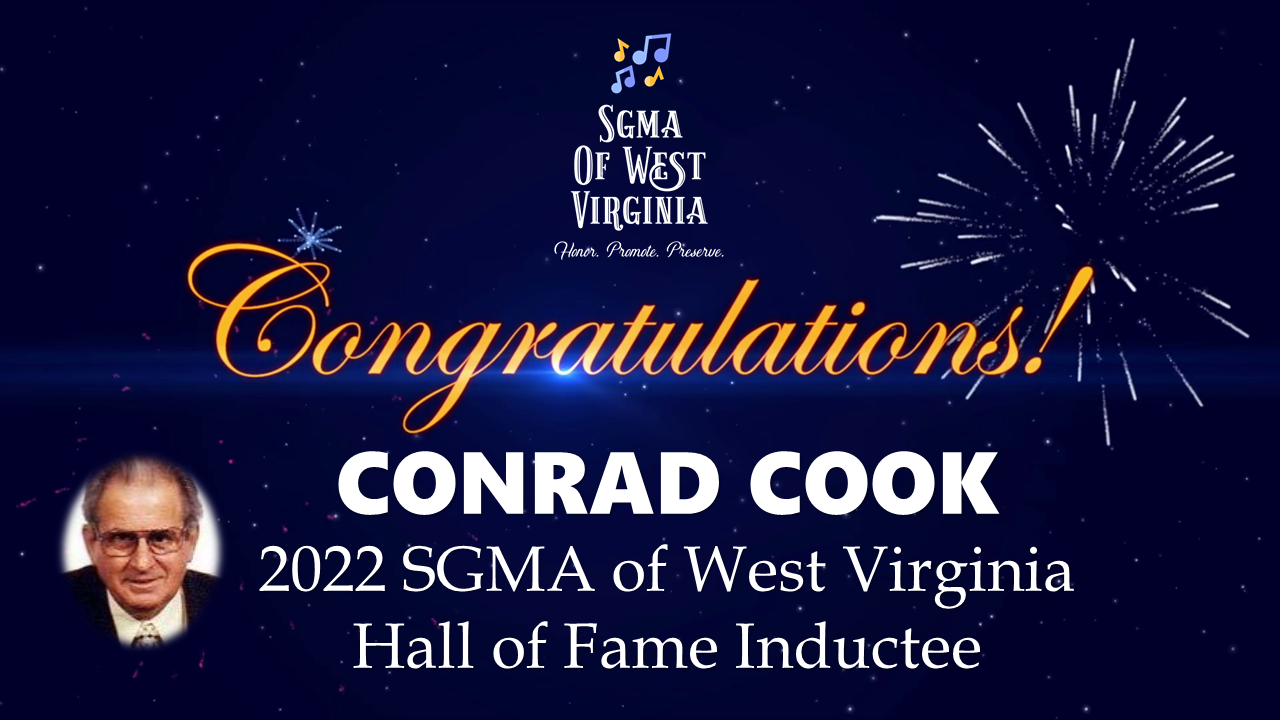 When you think of the great songwriters in our genre of Southern Gospel music, names such as Squire Parsons, Rodney Griffin, Dianne Wilkinson, Dottie Rambo, Ronnie Hinson and others come quickly to mind. And rightfully so. The ability to effectively convey Godâ€™s word through powerful lyrics and beautiful melodies is a gift. And throughout our musicâ€™s history, there has never been anyone more gifted in songwriting than Conrad Cook.
Conrad began his Gospel music career in the 1960s, with West Virginiaâ€™s Calvarymen Quartet. While the group underwent numerous membership changes over the years, the lineup that people most remember and talk fondly about today featured Conrad, his brother Bernard (bass) and SGMA of WV Hall of Fame inductees Jim Humphreys (baritone), Squire Parsons (lead) and Virgil Parsons (tenor). It was this group that introduced one of Conradâ€™s most iconic songs, â€œGlory Roadâ€, to Southern Gospel music in 1971.
After leaving the Calvarymen Quartet, Conrad began traveling and singing with his family group The Calvary Echoes. While his singing group may have changed, his prolific writing skills did not. Southern Gospel music standards such as â€œThe Old Ship of Zionâ€, â€œWhen My Feet Touch the Streets of Goldâ€, â€œSaints Will Riseâ€ and â€œMy Anchor Still Holdsâ€ flowed from his pen. His songs have been recorded by Kingsmen Quartet, The Inspirations, Kingdom Heirs, Singing Americans and countless others. His Calvary Echoes group also scored a top-20 hit with one of his compositions, â€œMoses Take Your Shoes Offâ€. The Calvary Echoes achieved national success, performing on the main stage at NQC – National Quartet Convention, at the
Grand Ole Gospel Reunion and on the Gaither Homecoming video series.
We are excited to announce Conrad Cook will take his rightful place in the SGMA of West Virginia Hall of Fame on Saturday, March 19th, 2022 at Charleston Mountain Mission Church. He will be inducted posthumously alongside the rest of our inaugural class. We have one more inductee to announce so keep checking back for that announcement.
Congratulations to the Cook family!