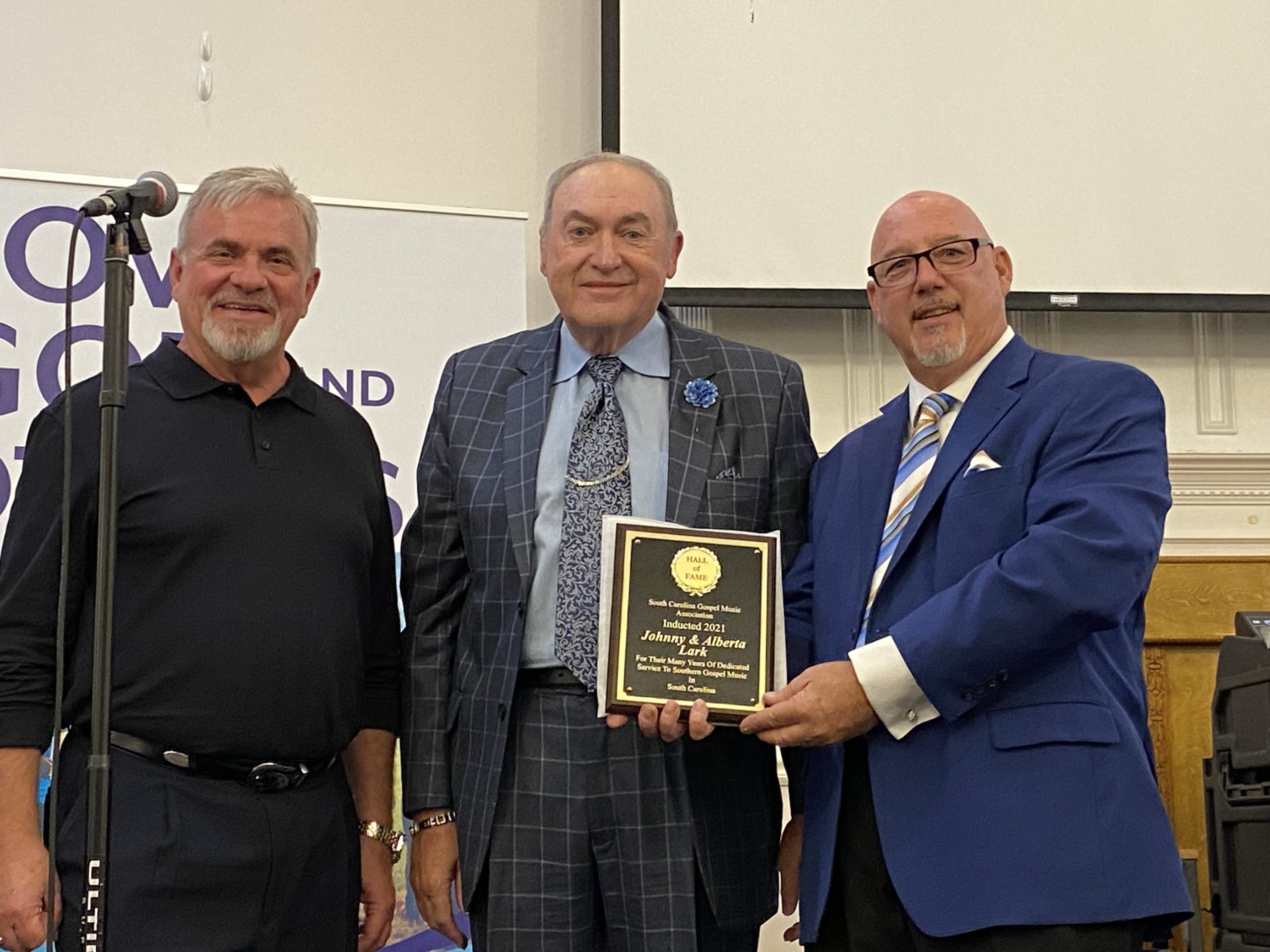 Each year the South Carolina Southern Gospel Music Association inducts a number of South Carolina individuals who have made a distinguished mark in gospel music. After being postponed in 2020 due to the pandemic, the 2021 fall ceremony was hosted by Keith Crowe with a special concert by the Pine Ridge Boys.

The inductees for 2020-2021 are all well known in the state. Many continue to make an impact singing, promoting or through their mentorship. Artists who were honored posthumously had family to accept the awards.

Johnny and Alberta LarkÂ are well-known names in Spartanburg and surrounding SC upstate area. Both began their singing career in the 1940â€™s continuing for some 50 plus years.

Over the years the Larks were members of The Sunset Qt, Cleartones, the Dual Tones, while Alberta was also pianist for the Regents. The Calvary Quartet evolved into The Sounds of Calvary that continued for over 35 years.

Johnny Lark is also known for his time on radio. He was spinning gospel records on WKDV Radio for over 35 years until 2005. Johnny was also instrumental to bring gospel concerts back to the Spartanburg Memorial Auditorium working with Charles Burke and the Singing Americans.

Ronnie and Joette CarrollÂ are from Greenwood, SC. Their musical prowess began in church with family. Joette began her musical career under the guidance of her father who was a minister as well as a quartet person. Ronnie had a similar beginning in music through his church music team.

The beginning of Ronnie and Joetteâ€™s singing together begins with the Woodland Trio. Next came the New Hope Singers, while in 1971Â  the Centurions were established and are still going today. This year celebrated 50 years in music ministry.

Ronnie was instrumental in the founding of the Lakelands SGMA in 2002. Itâ€™s origin was to preserve, promote, teach Southern Gospel Music as well to share the joy of salvation. Today this association consists of 10 groups working to fulfill the aforementioned mission.

Duward YearginÂ is not a name some may not know, while many in the upstate local church music scene will recognize. Looking at Duwardâ€™s accomplishments the SCSGMA committee agreed he should be part of this hall of fame.

He was local to Greenville County, studied music at Furman University and was music director at North Fork Baptist Church for over 20 years. He also spent 20 years in Chicago as part of an evangelistic team with a group called the Duward Yeargin Singers.

In the late 50â€™s and early 60â€™s he played piano for The Continentals and The Sierras. Lavern Tripp was a member of this group. Duward was a major factor in the musical careersÂ  of 4 SCSGMA members. Tom Brown, Carl Whitman, Joel Duncan and Ken Turner.

Randy ArmentroutÂ was born in Lugoff, SC and now lives in Cassatt, SC. He started singing in 1976, a sophomore in high school. In 2006 he joined the Lumber River Boys as the bass singer. With them he travelled over 200 days a year in both the US and Canada. He departed the group after 9 years. He also sang with the Heritage Quartet for 3 years before returning to the Lumber River Boys where he remains today.

Earle OutlawÂ was from Columbia SC. He began his music affiliation as director at several churches. He sang in several groups including the Men of Melody and The Midlands Quartet. In addition to his musical talents, he was also a songwriter.

Earl became a promoter and organized monthly concerts. As this effort began to grow he realized that there was a need for a place to be dedicated for this purpose. As he enlisted the help of others to make this need a reality but with time one by one the others began to drop out. But Earl kept going. Land was donated and the building was completed in the late 90â€™s. Today the Midlands Gospel Music Center which seats 300 continues to have monthly concerts.

Earl is remembered for his singing and great personality. Even in the last few months of his life with dementia he could still sing that â€œgood ole gospel musicâ€ to the amazement of his caregivers. He passed away in 2017 at the age of 90.

Steve HanksÂ is from Anderson and began piano lessons at age 10. In his early years he was mentored by Otis Forest and Floyd Cramer for which he is eternally grateful. In the 70â€™s he played piano for SCSGMA member Bobbie Jean White for two and one half years he played for The Travâ€™lers Quartet for a short period of time. Then he joined LaVerne Tripp in 1976. He was not only the pianist but also the band leader. In 1989 he went with the Regals based in Spartanburg.

He has appeared on TBN, 700 Club, PTL Club and The Gospel Edition OF The Grand Ole Opry. In 1995 he opened North Anderson Music Studio where helps inspiring musicians to polish their craft and talent. Today he continues to use his talent in a church in Pickens.

Russell has sold more choir music to the gospel church market than any other arranger. His music has encompassed the globe while never losing sight of his appreciation for the gospel roots planted in SC. One other top of the list accomplishment for Russell is that he put out a record entitled the â€œDisco Tiger Ragâ€.

Steve has many accomplishments to his credit. Among them he worked with some of the biggest entertainers in the industry such as Chet Atkins, Ray Price, The Cathedrals, Kenny Rogers, Carrie Underwood and on and on. He has won many awards and featured in many publications.

Harold and Joyce Rochester of the RochestersÂ is a family group from Blacksburg, SC.

Harold and Joyce met in 1955 and began singing mostly in their church and other local churches. Over time the family became quite popular in the region. In 1988 they went full time into music ministry. For over 30 years they have travelled approximately 80,000 miles each year in the US and Canada. The popular SC family has recorded over fifteen projects. Now in their late 80â€™s Harold and Joyce continue to travel and sing. They have sung for over 66 years and are still in demand. However, January 2022 marks the retirement of the Rochesters founders.

This yearâ€™s award is unique as the Rochesters are singing in Mississippi doing what they do best, share the good news.