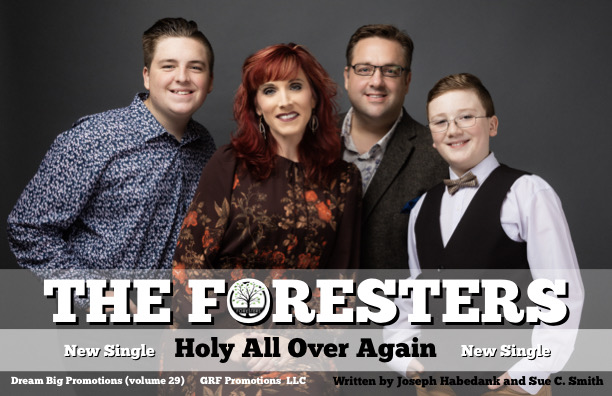 The Foresters, a full time family band from Michigan are excited about a busy summer of recording and performances.

Their debut single, Deliver Again is sitting at #25 in this months SGN Scoops magazine. The Foresters are thrilled with the way radio has embraced their debut release to radio. Following up this successful effort, The Foresters are releasing their second single entitled, Holy All Over Again. Written by Joseph Habedank, Lee Black and Sue C Smith, this amazing lyric captures the majesty of the ongoing praise happening in Heaven. Â Radio stations have already been adding the new single and it is showing up at the top of stations weekly charts already. As a new to radio group, The Foresters are so grateful for this acceptance at radio.

June is a busy month for the Foresters with a debut appearance at Dollywood on June 1st at the Lines Theater. The will be four performances that day by The Foresters.

Also in June, The Foresters begin their new recording project. It will be produced by Grammy nominated producer, Scott Godsey. It will feature the best musicians in Nashville including Gordon Mote, Scott Williamson, Kelly Back, Joel Key, Scott Sanders, Aubrey Haney and Duncan Mullins. The Foresters are especially excited to have Scott Williamson (Gaither Vocal Band, Joseph Habedank, Triumphant) mix this new recording.

You can see the Foresters on tour nationwide this year with performances than span from Michigan down to Florida and from Maryland to Nevada.