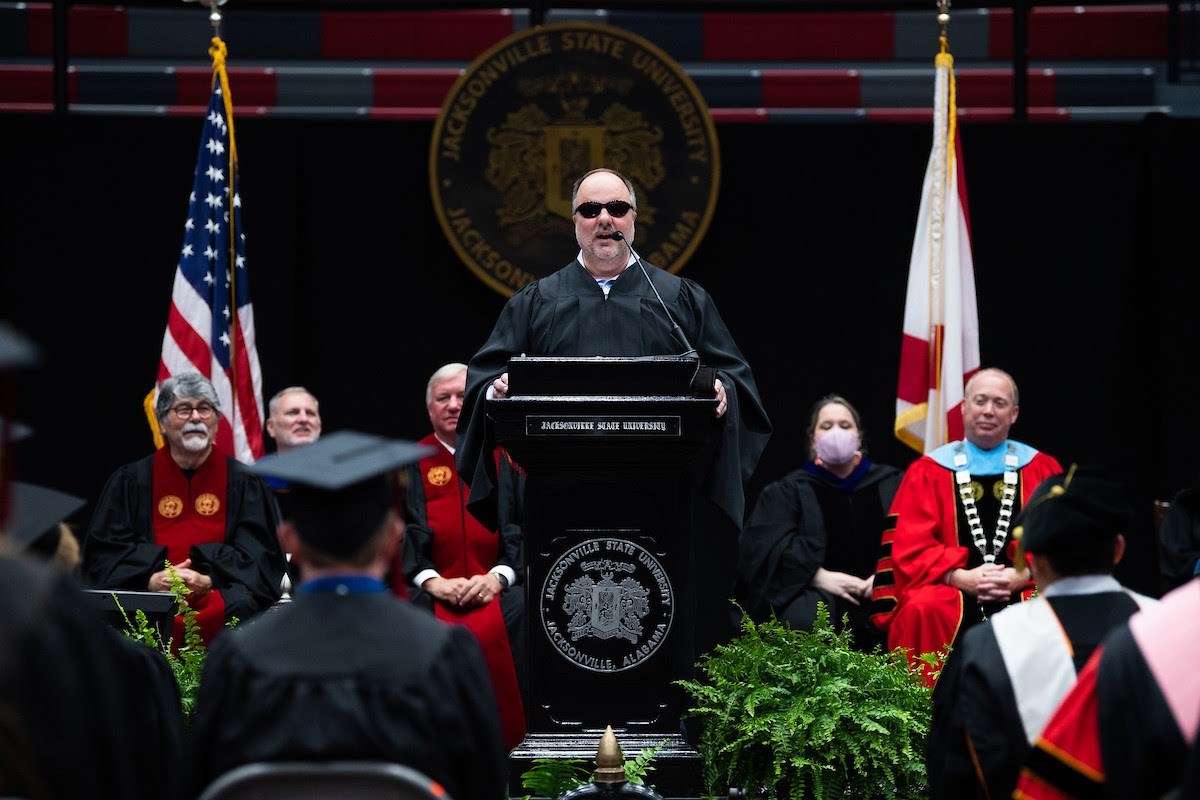 NASHVILLE, TN — Last month, three-time Academy of Country Music® Piano/Keyboard Player of the Year and New Haven Records recording artist Gordon Mote was awarded an Honorary Doctorate of Letters by Jacksonville State University (AL) in recognition of his outstanding contributions to music. Mote, an Alabama native, attended the University for three years before completing his undergraduate degree at Belmont University in Nashville.

At the commencement ceremony, Randy Owen, lead singer for the legendary country band Alabama, introduced Mote to the graduation attendees. Owen, himself a JSU alumni and member of its Board of Trustees, described his longtime friend by saying, “Life certainly has not been easy for Gordon Mote, but he combined hard work with natural talent and made an incredible life for himself.”

Blind since birth, Mote has become one of Nashville’s most celebrated studio musicians and live concert sidemen, eventually touring with some of Country and Gospel music’s biggest artists, including Lee Greenwood, Porter Wagoner, the Gaither Vocal Band, Brad Paisley, Carrie Underwood, Rascal Flatts, Blake Shelton, Trisha Yearwood, and Alan Jackson, among others. He is currently performing with Alabama on their worldwide 50th Anniversary Tour.

Addressing the JSU graduating class of 2022, Mote shared the profound influence the University and its faculty had upon his life. Mote recalled that—following a particularly disappointing episode in college—a faculty mentor had challenged him with these words, “There are twenty-four hours in a day. It’s up to you how you use them.” Mote shared that he has carried this wisdom with him throughout his life and encouraged JSU’s newest graduates to do likewise by making each day count with passion, humility, and integrity.

In addition to “Dr. Gordon Mote’s” solo touring schedule, he will also be touring with Alabama this summer. “Live Forgiven,” the latest single from his Grammy-nominated solo album, LOVE LOVE LOVE, has recently been released to radio. Mote observes, “While the majority of Americans call themselves Christians, far fewer of us really know how to live in the light of God’s unconditional love. “Live Forgiven” is a call for us to realize who we are, whosewe are, and the mercy and healing available to us. If we ‘live forgiven,’ not only will our own lives be transformed, but we’ll also become agents of grace in our homes and communities. More than anything, that’s what America needs right now.”

LOVE LOVE LOVE was nominated for a Grammy for Best Roots Gospel Album of the Year, and is Mote’s fourth release on the New Haven Records label.