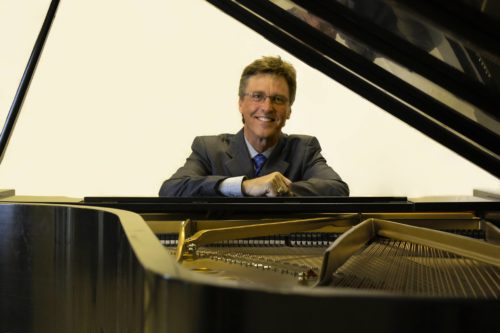 We at SGN SCOOPS are saddened to hear the news of the passing of Jeff Stice, “Mr Piano Man.” Jeff passed away today after a Hospital stay since August 28th. Jeff took a serious fall in his home resulting in neck and spinal injuries. Jeff was 61 years old. He was a friend to everyone he met and he will be greatly missed.Â

His love for the piano started at the age of 6. His mother played and every time she did, he would lie under the piano and listen. When she would finish, he would get on the stool, place his hands on the keys and begin to pick out the melody of some of the songs he had heard her play. At the age of 8 he began taking lessons and it was recognized early on that he had â€œan earâ€ for music. Jeffâ€™s parents began to take him to Gospel Concerts where he immediately fell in love with â€œThe Piano Playersâ€. As he began to grow older his love for Gospel Quartet Music began to grow as well. At the age of 15 he began playing for his fatherâ€™s quartet, winning high school talent shows along the way. After Jeff graduated from high school he went on to major in Piano Performance at Western Kentucky University. Shortly after, Jeff was offered a job with The Blackwood Brothers playing piano for them for 4 years. He then moved on to be the piano player for The Rex Nelon Singers. While there, he received The FAVORITE YOUNG ARTIST AWARD by The Singing News Magazine. It was during this time that Jeff began to develop the art of communicating through his music. Featured on different solos each night, he would always seem to connect with the audience. To this day, Jeff credits Rex as one of his primary teachers and mentors. In 1990 he helped form PERFECT HEART. It was during his time there that he received his first MUSICIAN OF THE YEAR AWARD from The Singing News Magazine. As a member of PERFECT HEART, Jeff began to venture on his own from time to time doing solo concerts, where he would play dramatic standards of Gospel and Classical Music as well as hand clapping Southern Gospel favorites.Â  In 2002 he was offered an opportunity from LOUISE MANDRELL to put together a Quartet for her theatre in Pigeon Forge, Tn. Because of this, he helped form THE TRIUMPHANT QUARTET where he played for, arranged and produced their music for 12 years. Jeff also played in Louiseâ€™s orchestra on several occasions. During this twelve year span, Jeff was honored to receive a number of awards and recognitions. He was voted MUSICIAN OF THE YEAR in 2007 by the SOUTHERN GOSPEL MUSIC GUILD. He received THE FAVORITE MUSICIAN OF THE YEAR AWARD in 2009 and 2012 at THE SOUTHERN GOSPEL FANFARE. In 2007 he was voted into THE EDMONSON COUNTY MUSIC HALL OF FAME in BROWNSVILLE, KENTUCKY. In 2010 and 2011 he received GRAMMY and DOVE AWARD nominations for the album LOVE CAME CALLING, which he co produced with Wayne Haun. He produced and arranged the album SONGS FROM THE HEART which was voted THE FAVORITE ALBUM OF THE YEAR in 2012 for The SINGING NEWS MAGAZINE. He received THE MUSICIAN OF THE YEAR AWARD by The SINGING NEWS MAGAZINE in 2008, 2009, 2010, 2011 and 2012, and in 2019, He received The Anthony Burger Instrumentalist Of The Year Diamond Award from SGN Scoops Magazine in 2019.Â

In February of 2014, Jeff went through a season of reflection and change. He enrolled in an intense discipleship program for three months. While there, he discovered God in a way he had never known Him before: â€œWhile sitting on a picnic table by a creek one afternoon, I felt Godâ€™s arms wrap around me. He drew me close and reminded me that he loved me unconditionally and that He had given me a gift to shareâ€¦the gift of Grace. For 46 years I had known about God, but now I know how to BE with God.

Funeral Arrangements to be announced. Please pray for the Stice Family during this time.