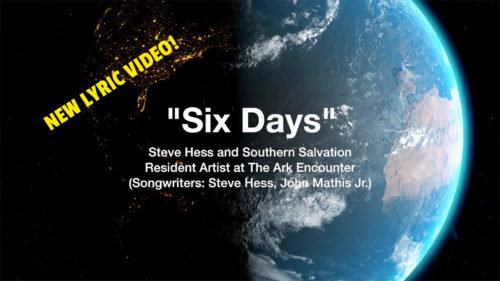 Franklin, TN (March 3,2021) Answers In Genesis, the parent ministry of The Ark Encounter and Creation Museum, has debuted the new lyric video from Steve Hess and Southern Salvation, â€œSix Daysâ€, on its streaming platform. Founder and CEO, Ken Ham, had previously tasked Steve Hess and John Mathis Jr. with writing a new song that reinforces the message of Genesis the first chapter and the account of creation. The result of that request is the new song, â€œSix Daysâ€. The musicians were assembled at Watershed studios in Brentwood, TN and included the talents of Gordon Mote, Kelly Back, Mark Burchfield and Garth Justice and the group recorded their vocals at the Mansion Entertainment studio in Franklin, TN.
As the resident artist of the Ark Encounter, Steve Hess and Southern Salvation have the opportunity to share Southern Gospel Music approximately 400 times a year from the Answers Center Theater stage located adjacent to the Ark. In addition to that honor, the group has been able to create and share important ministry messages in song such as the message of Pro-life (â€œThree Beating Heartsâ€) and the importance of our Christian beliefs being based solely on the Word of God (â€œFoundationâ€).

The â€œSix Daysâ€ lyric video made its debut onÂ Answers.tvÂ and is available for viewing here:â€œSix Daysâ€ lyric video
ABOUT STEVE HESS & SOUTHERN SALVATION:Â Steve Hess & Southern Salvation are the resident artist at The Ark Encounter performing about 400 concerts per year. They have been featured on programs such as Daystarâ€™s Gospel Music Showcase hosted by Guy Penrod and The Gospel Greats hosted by Paul Heil. SHSS have garnered multiple Singing News Top 80 and Top 40 chart songs, including â€œThree Beating Heartsâ€ and â€œFoundation”.
ABOUT MANSION ENTERTAINMENT:Â Mansion is a Nashville TN based record label with distribution through The Orchard (a division of Sony Music). Mansion has distributed artist projects in Southern Gospel such as the Palmetto State, Triumphant Quartet, Three Bridges, Sherry Anne LIVE! DVD (Top 5 Billboard Music Video chart), The Griffith Family, Steve Hess & Southern Salvation, and others. Bluegrass Gospel by Tonja Rose and The East Ridge Boys. The GRAMMY Nominated ‘Forever Changed’ album by T. Graham Brown (Billboard Album Sales Top 100), â€œBecause You Love Meâ€ by T.G. Sheppard and â€˜A Bluegrass Tribute To George Jonesâ€™ by GRAMMY Winner Brad Davis. Mansion has recently expanded with releases into the Praise & Worship and the Spanish Language Market.