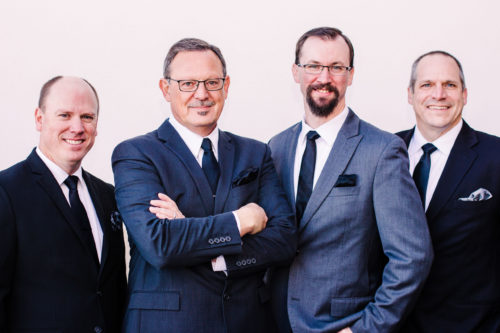 Â Beyond The Song:Â  Miles of Miracles

We recently caught up withÂ Liberty Quartet.Â  In this interview, we will take you on the journey of their ministry and the song they just released to radio, “Miles Of Miracles.”

(SGN SCOOPS) Have you reached the point in this pandemic where youâ€™ve realized how important it is to count your blessings?

Liberty Quartet is helping to remind us of that with their brand new recording, â€œMiles of Miracles.â€ Our featured song is the title cut of the same name but, before we get to that, letâ€™s log some miles beyond the song.

(SGN SCOOPS) Who in the (Southern Gospel) world is Liberty Quartet?Â

According to lead singer Paul Ellis, they might be â€œone of the best quartets youâ€™ve never heard of.â€ After all, how can a group that hails from Boise, Idaho â€“ in the Northwest â€“ be a Southern Gospel Quartet?Â  Bass singer and founder, Royce Mitchell, explains that Boise is in the â€œsouthernâ€ part of Idaho. Yes folks, after being around these guys for a few hours, youâ€™ll wonder how something so â€œcornyâ€ could come from a state known for its famous â€œpotatoes.â€

Liberty Quartet (LQ) is Royce Mitchell, Bass and founder of the group; Paul Ellis, Lead; Philip Batton, Tenor; and Will Arasmith, Baritone. Paul has been with the group for 11 years in two different stints and has managed to sing every part except the one he covets the most, bass. Philip has been singing that high tenor part for 10 years now, and with the hiring of Will Arasmith on January 1, 2020, LQ feels as if they are hitting their stride or should we say, getting up to speed, to keep with the â€œMiles of Miraclesâ€ analogy.

Liberty Quartet got its start in 1995. Royce Mitchell, then a music minister in a Nazarene church, recruited three of his choir members and started singing quartet music. By 1997, the group had a full-time schedule of concerts booked and, in 2002, all four members considered traveling and singing with LQ as their full-time occupation. Royce shared how gospel music is something thatâ€™s always drawn him closer to the Lord and itâ€™s that medium God used to allow LQ to reach unbelievers and encourage the saints. Psalms 104:33, â€œI will sing to the Lord all my life; I will sing praise to my God as long as I live,â€ is the scriptural promise Royce claims for both his personal faith journey and the ministry of LQ.Â  The name Liberty Quartet was derived from two main sources: Galatians 5:1 â€œStand fast therefore in the liberty by which Christ has made us free, and do not be entangled again with the yoke of bondageâ€ (NKJ), and secondly, the Nazarene church where Royce was working resided on Liberty street.

Early on, there were some very important decisions made that would shape the miles over the next 25 years. For one, LQ is governed by Liberty Ministries Inc. which is a 501c3 corporation.Â  Basically meaning the group is set up somewhat like a church with a board making decisions regarding personnel, finances and management. It also meant that LQ could develop an army of folks called â€œFriends of Libertyâ€ who support the group financially much like you would your local church. Paul mentions that at no time in their ministry was the support from their â€œFriends of Libertyâ€ more evident than throughout this pandemic. While there have been â€œMiles of Miraclesâ€ â€“ this particular uphill stretch stands out.

The support given allowed them to not only survive but thrive. During this past year they released not one, but three new recordings. A bass featured tribute recording titled, â€œRemembering George Younce,â€ an acappella release titled, â€œUnspeakable Joy,â€ which has everything from Christmas to patriotic, hymns and even a little bluegrass, and their latest and featured recording, â€œMiles of Miracles.â€

Before the pandemic had even begun, Royce was looking ahead toward the celebration of LQâ€™s 25 years in ministry. While at the Southwest Gospel Music Festival in Phoenix, AZ in the spring of 2019, he reached out to fellow quartet singer (Legacy Five) and gifted songwriter, Lee Black, commissioning him to write a song that would highlight the miles of miracles LQ has experienced. Lee, a Dove award winner, teamed up with co-writer, Brent Baxter, to craft a song that not only spoke to LQâ€™s journey but â€“ more importantly â€“ reminds each and every one of us to pause for a moment and count our blessings.

The quartet shared how each time they sing the song in concert it brings a flood of memories of how God has truly blessed them and LQ through the years. One miracle in particular that Royce recalled is from the early days of ministry. The bills and expenses had been piling up and there werenâ€™t enough funds in the bank. The group had met that morning for coffee to discuss upcoming tours and to pray together about the financial situation. On the way back to the LQ office the group decided to stop by the P.O. Box to get the mail. Little did they know, God had already provided the miracle they needed.Â  In the mailbox that day was a check from a â€œFriend of Liberty.â€ The check was almost to the penny of what they needed to pay the outstanding bills.Â Â

The miracle that came to mind for Paul is one that has a few miles in it. The group was on their way from Boise, ID, to Grand Rapids, MN.Â  The plan was to fly into Minneapolis, MN, where the bus had been parked from a previous tour and then drive on to Grand Rapids for the concert that night. When their connecting flight landed in Denver they learned that the flight from Denver to Minneapolis had been cancelled â€“ not delayed â€“ cancelled.Â  Every one of the LQ members sprang into action getting on their cell phones and trying to devise a plan to somehow make it to the concert.Â  We were finally able to find a flight that would get us to Fargo, ND, early enough we could rent a car and get to the venue on time to sing. Unfortunately, that meant that we would be singing without our own sound system and we wouldnâ€™t have any product from our bus to sell. As Royce was speaking to the host and letting him know of our predicament the host interrupted him to say, â€œHey, I own a trucking company here in Grand Rapids. One of my drivers just landed in Minneapolis this morning and needs to find a way back home.Â  Is there any way that he could drive your bus here for the concert?â€ Royceâ€™s answer was a simple and quick, â€œYES!â€ We explained to our host over the phone where the bus was parked in the Minneapolis airport and how his driver could break into it (that was a first and hopefully a last).Â  LQ had their own adventures getting to the venue there in Grand Rapids, but when they did arrive there was the tour bus waiting in the parking lot for them.Â  Literally miles and miles â€“ whether by plane, rental car, or tour bus â€“ of miracles.

This song invokes those kinds of memories every time Liberty Quartet sings it. Itâ€™s a joy to look out across the faces of those in attendance and see how they are connecting with the message. Smiles appear as they begin to consider all the miles of miracles that God has bestowed upon them.Â  For LQ, the response from fans has been overwhelming.Â  LQ has always tried to be a group that sings a variety of songs with a variety of styles. This particular song has a modern edgy feel to it and the audiences love it.

The list of miracles grows quite long when youâ€™ve been in ministry as long as LQ and it includes everything from amazing physical recoveries for voices, to entertaining angels who can repair a 1996 Golden Eagle Entertainer coach on the side of the road. The group has witnessed time and again how God meets their financial needs, which brings to Paulâ€™s mind Psalm 37:25, â€œI was young and now I am old, yet I have never seen the righteous forsaken or their children begging bread.â€Â  Royce and Paul both agree that all those miracles pale in comparison to those times when the quartet witnesses the miracle of an unbeliever becoming a child of the King. Salvation of unbelievers is the main reason LQ exists. Itâ€™s so important to the group that two of the thirteen songs on this latest project speak directly to that end, â€œNever Againâ€ and â€œOne Song Away.â€

Speaking of the other songs on the project, Paul, listed as Executive Producer on the recording, shared how those 12 songs were the result of hours of listening through song pitches, literally hundreds of demos. He and Royce narrowed those down to a pool of 45-50 songs that the quartet listened to and voted on before they made the cut. With songwriters like Rebecca Peck, Dianne Wilkinson, Lee Black, and Marty Funderburk, itâ€™s understandable why it can be so difficult to narrow the song list down. Paul explains while there was not a specific theme they were focused on throughout this process, the one that developed in the end was that of being blessed in the midst of trial, choosing to see the miracles instead of just the miles.

As we closed our time together Royce pointed us back to the Word of God quoting the theme scripture LQ has adopted for their â€œMiles of Miraclesâ€ tour. Acts 2:22 says, â€œâ€¦ Jesus of Nazareth was a man accredited by God to you by miracles, wonders and signs, which God did among you through him, as you yourselves know.â€ Youâ€™re invited to get to know this 25 year old quartet. You can find them online at www.libertyquartet.com or search for Liberty Quartet on Facebook, Instagram, Twitter, YouTube, iTunes or your favorite streaming service. Donâ€™t forget to request this latest single â€œMiles of Miraclesâ€ which is already being met with wonderful reviews and the message is bringing encouragement to the listener. Who knows, maybe some of Liberty Quartetâ€™s miles will bring them to your neck of the woods. Now thatâ€™s my kind of miracle.

Thank you guys for taking us on the miles and miracles that Liberty Quartet has experienced on their 25 years of ministry. Spreading the love and salvation that is in Christ Jesus who is the only hope. May God guide this wonderful group to places to uplift and strengthen them in their faith through your singing.