“If you know me, you know I love my family,” Crabb says. “It was a joy to share memories of my grandmother and family with the readers of Country Living. Merry Christmas, everyone!” 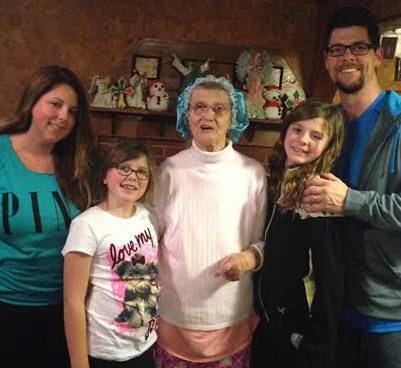 Shellye Crabb, Emma, Grandmother Billie Richardson, Ashleigh, and Jason Crabb
The essay is part of an exclusive series for the magazine calledÂ “My Favorite Christmas.”Crabb joinsÂ Martina McBride, Mario Lopez, Carla Hall (ABC’s The Chew), Hillary Scott, Rory FeekÂ and more for the special articles.
CLICK HERE TO READ THE ARTICLE.
ABOUT JASON CRABB:
Grammy winner Jason Crabb is well known as one of the most compelling voices in any genre of music. Crabbâ€™s electrifying stage presence, powerhouse vocals, and magnetic personality have endeared him to millions across the world. With his power, range, and passion, he has moved easily among musical styles including gospel, country, and pop.Â Jason released his first solo album in 2009, earning him a Grammy the following year. Since then, heâ€™s amassed numerous industry accolades, among them 21 GMA Dove Awards, including wins in the â€œArtist of the Year,â€ â€œMale Vocalist of the Year,â€ and â€œSong of the Yearâ€ categories. In addition to his recording career, Crabb is also an actor and author. He shared his life story in the inspiring book,Â Trusting God to Get You Through, and has written a series of successful childrenâ€™s books.Â Whatever The Road, Crabb’s latest project, was honored with a 2016 Grammy nomination for Best Contemporary Christian Music Album and he is currently in the studio working on a new project with Jay DeMarcus (Rascal Flatts) producing. Crabb has been covered by such outlets asÂ Associated Press, People Magazine, The Huffington Post, Billboard, USA Today, Fox News, Entertainment Tonight,Â andCountry Weekly, among others, and was named one of Nashvilleâ€™s Most Beautiful People by Nashville Lifestyles Magazine. Crabb is also frequently seen on television hosting on TBN, appearing on awards shows and television specials for aÂ  variety of networks. For more information, visitÂ www.JasonCrabb.com