“The album isn’t purely bluegrass gospel. There’s a lot of country gospel too. But it’s a strong album by one of  bluegrasses best vocalists.” –

Nashville, TN (September 24, 2014) – Steve Gulley’s album “Family, Friends & Fellowship” on Rural Rhythm Christian will be featured on Bluegrass Junction’s “Gospel Train” show on Sunday September 28th.  The “Gospel Train” radio show is a weekly program that plays the finest bluegrass gospel music around and airs on Sunday’s from 6:00 am to Noon on the Bluegrass Junction (Channel 61) from SiriusXM radio.  The program will feature Steve Gulley talking about “Family, Friends & Fellowship”, playing songs from the album, and giving the listener the back story for each song.

In addition, “Family, Friends & Fellowship” will be the featured on Front Porch Fellowship with host Les Butler during the month of November.  Steve stopped by the Solid Gospel Radio offices earlier this month and talked with Butler about the album and the back stories relating to the songs.  Listeners can tune in to Front Porch Fellowship on Saturday and Sunday during November from 4-5pm CST on their local Solid Gospel affiliate, or at www.solidgospel.com to hear interviews and highlights from “Family, Friends & Fellowship” on Rural Rhythm Christian. 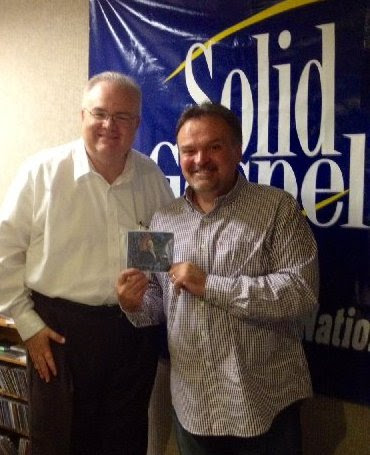