NASHVILLE, Tenn. (November 27, 2019) â€“Â The Crabb FamilyÂ will be all over the media landscape this week showcasing new music from their upcoming Daywind Records release,Â 20/20.Â The iconic family group is set toÂ appearÂ on TBN for a rare concert special on Thanksgiving night, Thursday, November 28, 2019 at 8 PM ET / 7 PM CT. 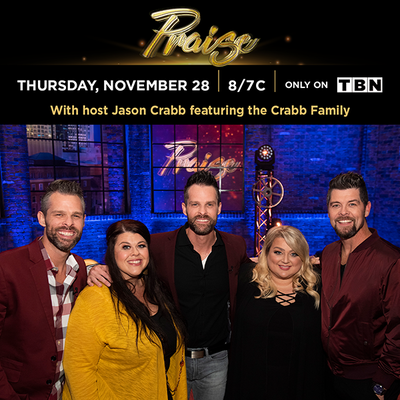 â€œI See Revival,â€ the family’s first single in eight years, drops on all music streaming platforms at 12:01 AM ET on Thanksgiving morning, with special placement on Apple Music, Pandora, Spotify, and Amazon.
The song released to national radio early this week and has been picked up immediately for airplay. Streaming radio app, TheTreeRadio, is playing the new single every hour on the half hour this week in celebration of the first new music by this iconicÂ family group in eight years.
The single and the album,Â 20 /20, produced by Jason Crabb and Scott Godsey, prove that there is nothing like the Crabb Family songs and sounds.Â  They are in a league of their own and have not lost a single step since retiring from full-time performing as a group. This new projects marks the return of The Crabb Family to their longtime label home, Daywind Records, with a refreshed and renewed vision to impact the future with great gospel music!
In early 2020, the Crabb Family will hit the road on a national tour to promote February 28, 2020, album release.Â  The 2020 Vision Tour will journey through Louisiana, Texas, California, Arizon, Oklahoma, Alabama, Georgia, Tennessee, Ohio, Kentucky, Virginia, Florida,Â South Carolina and North Carolina.
Daywind president, Ed Leonard, was effusive in his praise for the new music, â€œI have never seen Jason and the family work as hard as they did on this record. With their amazing career filled with achievements from Dove Awards to GrammyÂ® recognition to international appearances, that says it all.â€
Pre-orders for The Crabb Family:Â 2020Â will begin in early January 2020 and the projectÂ will be available wherever you listen to music including on CD and limited-edition vinyl.